Interest in utilizing standing corn as an extended grazing system has been increasing and there are many aspects that make it an ideal crop for winter grazing. The reduced nutrient content in the leaves/stems late in the year is countered by the high value of the cobs produced and, if area access is limited through the use of grazing tools, cows will consume both the cobs and leaves/stems.

The agronomics of growing corn for winter grazing is a primary factor in determining yield and grazing days. Although soil temperature, seeding date, fertility and seeding depth will impact emergence and establishment, corn significantly lacks competitiveness with weeds as well as itself. Consequently, row spacing can play an important role in overall yield. A typical corn planter is designed with a row spacing of 30 inches, which is over 15 inches greater than most common seed drills. Along with row spacing, a corn planter will also space seeds out at a more even interval to reduce intra-row competition. This allows for optimum utilization of the water, light and nutrients that are available to the plants. 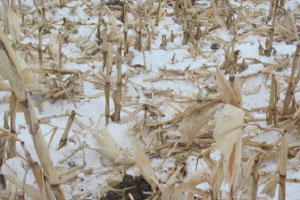 In the fall and winter of 2013/2014, data was collected on two 20 acre fields – one seeded with a corn
planter at 30 inch spacing and the other with a conservapak drill at 12 inch spacing. Yield samples were taken in late October and the same herd of 550 cows was turned out into each field. The field seeded to 30 inch spacing out-yielded the 12 inch spacing by 37% on a Dry Matter basis. These higher yields led to double the grazing days when the cows were turned out. On 20 acres, 14 days of grazing were achieved with the corn planter in comparison to only 6 days with the conservapak.

To investigate this further, LARA seeded a row spacing demonstration at the Fort Kent research site in the spring of 2014. Two plots of 15 m by 15 m in area were seeded – one at 27 inch row spacing and the other at 12 inch row spacing. The variety used was Baxxos and both plots were seeded with 200 lbs/acre of 46-0-0. Throughout the summer, the difference in row spacing was apparent: the plants with 30 inch spacing were larger with greater cob development and more cobs per plant. An early killing frost in September caused significant damage to the corn and reduced overall cob development. Yield samples were taken in late October and demonstrated a 24% yield increase with the greater row spacing.

On May 31, 2017, five corn varieties were seeded utilizing a corn planter with 30″ row spacing at the LARA Fort Kent Research Farm (NE25-61-5-W4). Prior to seeding, soil tests were taken and a blend fertilizer of 33-5-6-5 was side banded at 150 lbs/ac and incorporated via harrow. All varieties were round-up ready and the trial was sprayed with glyphosate at the 3-5 leaf stage with a three-point hitch sprayer and volunteer canola was hand pulled once during the growing season.

The varieties seeded along with their Corn Heat Units (CHU) are listed below:

Quality samples were taken prior to harvest in October, run through a wood chipper to reduce particle size and sent to an accredited laboratory for quality analysis. A cob sample was also taken from each variety to determine maturity.

Click Here to read the full quality and yield results from 2017.